The FPS Kit is available on Steam as optional DLC. This page explains some of the core functionality present inside this template.

Walls and other objects are mainly handled using Actors in this template, each separate wall section is partitioned to allow for complex room creation to the user’s choosing.

Instead of the normal method of placing wall tiles, you place a “Dynamic Object” onto the Map and change the “Body” to your desired wall section or object you wish to place. Using the wall or object as an Actor, instead of the normal tile method, allows for more orientation options. (Such as rotation and placement unhampered by grid snapping). 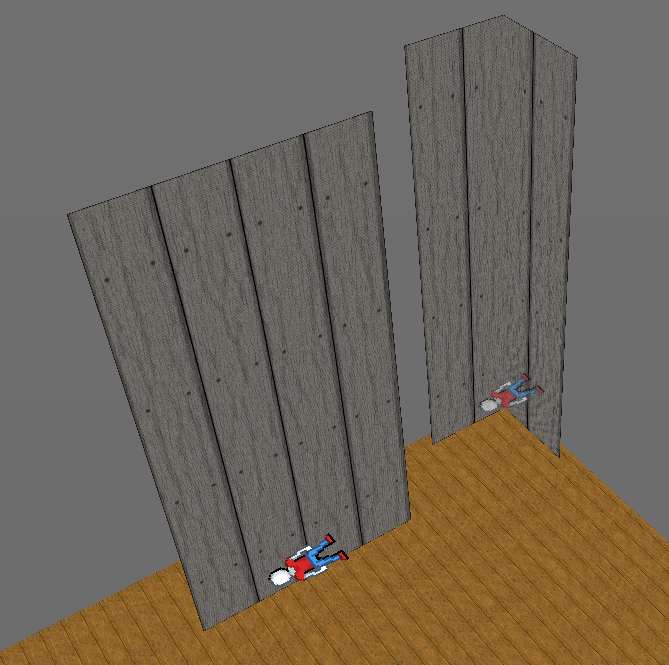 Ceilings are essential to almost every scenario when utilizing the 3D FPS template.

In the Map Editor, the Z layer for tile placement can be changed by using Ctrl+Middle Scroll Wheel or the “Page Up” and “Page Down” keys.

In the Map Editor, you can place an upper object tile on your desired layer. Tiles can be made visible on both sides by checking the “Render both sides in 3D” box under your tile name. An alternate method of creating the roof is importing an externally created 3D plane, then texturing it respectively.

In a recent update to 001, a new option has been added to the Map Editor allowing you to disable the 16 unit Actor placement snapping. By default Snap to Grid is enabled. It can be toggled on/off by clicking on the “Magnet” icon.

The FPS NPC clothing has been broken down into body portions rather than overlapping onto a solid body model, this has been done to prevent the mesh from having portions of the underlying texture to “bleed through” the clothing portions.

The head models for both “Male” and “Female” NPC models are set to the “Body” category and torsos have been likewise moved to the “Shirt” category respectively. This ensures that parts of the body can be interchanged with other 3D models of similar category.

As with many games, the WASD or arrow keys denote movement both in game and within menus.

Attack script, used to attack in front of player at a specified distance.

Deals damage and checks for material at impact location to play appropriate Sprites and sounds.

Reload script for guns, plays appropriate poses based on current weapon equipped to an Actor.